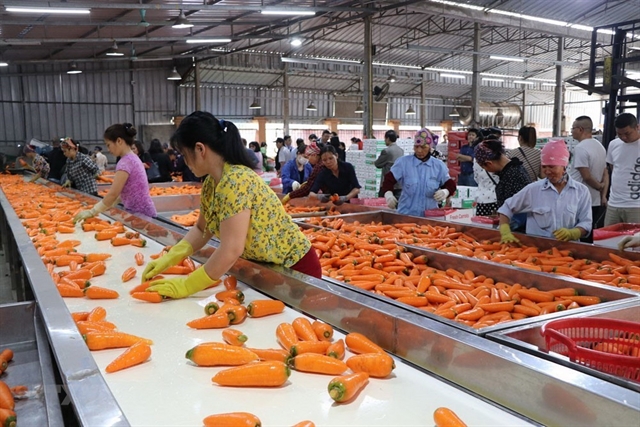 HÀ NỘI — The agricultural sector needs to focus on developing raw materials to reduce the dependence on imports as well as improve processing capacity, experts said.

Many agricultural products of Việt Nam saw exports hit billions of US dollars per year but production was still heavily reliant on imported raw materials.

For example, Việt Nam was among the world’s largest cashew exports but still has to import around 80 per cent of raw cashew for processing, mainly from Ivory Coast, Ghana, Nigeria, Guinea Bissau, Benin, Togo, Burkina Faso and Mozambique.

Việt Nam also had to import raw tuna for processing as domestic raw material sources only met 30-35 per cent of demand.

According to Nguyễn Văn Nam, former Director of the Việt Nam Institute of Trade Research under the Ministry of Industry and Trade, globalisation was expanding global value chains, meaning that for just one product, different production stages could be located in different countries, which depended on the capacity of each country.

For the cashew industry, for example, Nam said that while the processing capacity of plants in Việt Nam increased significantly, the production of raw cashew did not expand correspondingly due to limited cultivation land and farmers choosing other plants with higher added value.

This meant that Việt Nam must import raw cashew for production, which was a very normal thing, he said.

However, there would be risks when Việt Nam relied on imported raw materials. The recent Suez Canal blockage heavily affected the import of raw cashew which were mainly from Africa and had to go through this canal. This was an unanticipated risk, he pointed out.

Việt Nam had introduced a number of policies to support agricultural production, including measures to support prices or subsidies directly related to production quantities.

Nam said that under the World Trade Organisation, subsidies were subject to limits with “de minimis” minimal support allowed at 10 per cent for developing countries, including Việt Nam.

However, Việt Nam had not been successful in implementing subsidies support for the agricultural sector due to limited budget and the lack of an appropriate market mechanism.

Nam said it was important to develop comprehensive programmes and strategies to support farmers and agricultural enterprises to enhance their competitiveness, from raw material production to processing capacity as well as distribution.

Experts said that improving the processing capacity was also essential to increase the added value for agricultural products.

Statistics showed that there were more than 7,500 agricultural processing companies of large scale in Việt Nam with a total capacity of around 120 million tonnes of raw materials per year.

During the past three years, 30 agricultural processing projects were constructed with total investment capital of US$1 billion.

Only five to 10 per cent of the output of vegetables and meat were processed per year, Khang said.

The investment in processing was not equal to the development of raw material production, he pointed out.

Under the Prime Minister’s Directive No 25/CT-TTg dated June 4, 2020, Việt Nam targeted to become one among the world’s ten leading countries in terms of agricultural processing and agricultural product trading centres.

To achieve this goal, focus must be placed on improving processing and preservation technology capacity, experts said.